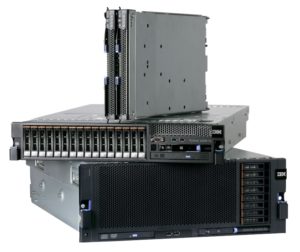 
An IFL is an orderable feature code that bundles core and memory activations along with no-charge PowerVM for Linux software for IBM Power Systems scale-up and enterprise class servers. IFL activations can only be used for running Linux and VIOS partitions. The following items are included with each IFL feature code that is ordered:


PowerVM for Linux is functionally equivalent to PowerVM Enterprise Edition, which includes the Live Partition Mobility (LPM) and Active Memory Sharing (AMS) features. A one-year or three-year software maintenance agreement (SMWA) must be purchased for the PowerVM for Linux license that’s included with the IFL bundle. Multiple IFL features can be ordered per server.

The IFL is only available for the enterprise class servers that feature Capacity on Demand (CoD), so these include the:


The primary reason for implementing IFL is to reduce initial purchase and on-going SWMA costs for Linux workloads. The IFL feature offers a bundle price for IFL-only core & memory activations. In addition, PowerVM for Linux is provided at no-charge. The SWMA pricing for PowerVM for Linux software is also reduced as compared to PowerVM Enterprise Edition. The net cost savings for the IFL feature versus general-purpose core and memory activations along with PowerVM software falls in the following ranges (based on three-year SWMA):

BM POWER8 scale-out servers have always offered a cost-effective solution for running Linux workloads. With IFLs, similar price points can be achieved when running Linux partitions on enterprise class E850, E870, and E880 servers. If you have or are considering the deployment of Linux workloads on enterprise class POWER8 servers, it’s recommended that you give us a call and we can take a look at the IFL bundle pricing for you.

For more information please refer to the IBM Knowledge center or speak to one of our certified consultants.

Recarta have always been able to tailor rental terms for our…

IBM Enduser customers could receive a rebate of up to $6500…